Candidates must answer all questions from the assignment.

Dictionaries are not permitted.

Printmark is a printing business set up two years ago by Mike and Jean Porter (as a partnership), when Mike was made redundant from his job as manager of a print shop. Mike does the printing and delivery work, whilst Jean, a former marketing manager, deals with advertising and administration.

A list of closing balances as at 31st March 2016, the last day of Printmark’s first accounting period, is provided below for you: 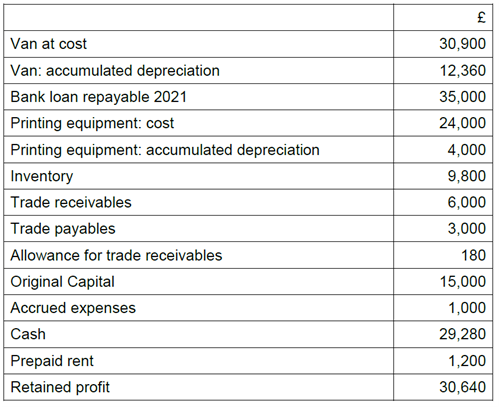 During the accounting period to 31st March 2017, the following transactions/events took place:

Prepare an Income Statement for Printmark for the year ending 31st March 2017. Show clear workings of how you arrived at each income statement figure.(19 marks)

Prepare a Statement of Financial Position for Printmark as at 31st March 2017. Present detailed workings of how you arrived at each statement of financial position figure, including the closing cash balance.                 (21 marks)    Total 40 marks

For each of the above, explain the convention and discuss its effect on the financial statements. Give relevant examples to illustrate your answer.  (15 marks)

2.It is widely known that Assets = Equity + Liabilities; however, users often struggle to understand what the statement of financial position really represents.

You are required to explain intuitively (without the use of a formula) why the statement of financial position balances. Use an example to support your answer. (5 marks) Total 20 marks

Hi there! Click one of our representatives below and we will get back to you as soon as possible.

Assignment Help UK David Walker
Chat with us on WhatsApp